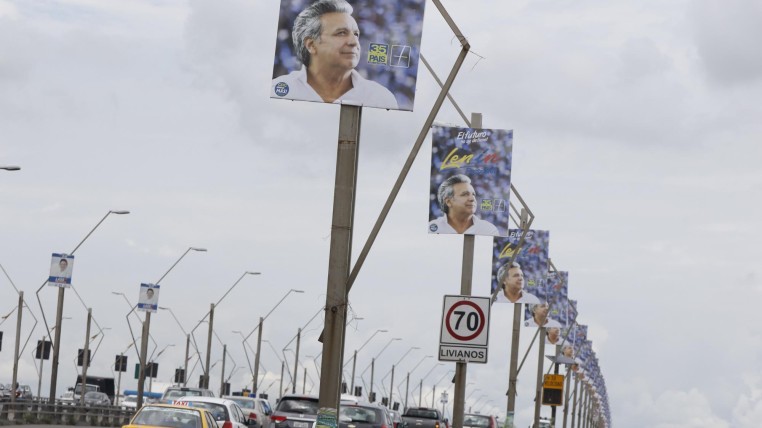 The candidate and vice-president Jorge Glas has disappeared from the new official propaganda for the second round.
Lenin Moreno appears alone in his posters, and without his companion, who has become the target of allegations of corruption by the political opposition. And after two weeks of a strategic and systematic reappearance in public, after a low-profile first round, Moreno’s campaign has chosen to highlight only the candidate for the presidency. Or, in other words, obviate the candidate for the vice-presidency.

In PAIS they are inclined to the first option. In an interview with DailyExpreso, Víctor Medina, of that party, considers that the propaganda change responds exclusively to “the political communication,” which bets to focus on the presidential hopeful. “Politics is like football: strategy,” assures the Legislator. “And the communication strategy has changed. That should not surprise the press or the voters.”

Medina points out, with certainty, that this is not the first time that PAIS seeks to focus attention on its presidential candidate. It already did so in 2013, when Rafael Correa was the epicenter of the propaganda. “That does not mean that there are no posters where they are together, sure there are.”
Moreno’s campaign expressly consulted on the possibility that the communication strategy seeks to separate the candidate from the negative links of his companion, did not respond to the questions of this Journal.