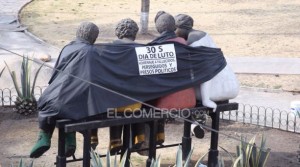 Interior Minister Jose Serrano called the black clothes that covered the busts of emblematic figures in the history of Ecuador, and people wearing mourning clothes yesterday as “an evidence of resentment and bitterness,” he said during the commemoration the Government made during the morning, in the old Regiment Quito 1, wherein the insubordination began on September 30, 2010.

“They should be in mourning because the triumph of democracy was the end for them … they just could not use our police to overthrow our President, and even assassinate him,” said Serrano.

In a white banner a message said: “30-S Day of Mourning. Tribute to those who died, those who are persecuted and the political prisoners. “The message was placed, yesterday morning (September 30, 2015), in monuments of Quito, to mark the fifth anniversary of the police insubordination that left five dead.

Dismissal of judges of the Court in 2004 was illegal, according to Torres