Movements against exclusion will meet next week at the Vatican 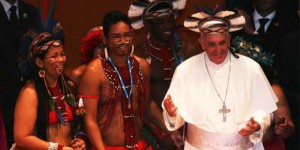 The Vatican presented today, the World Meeting of People’s Movements, which will bring together in Rome between 27 and 29 October a hundred of grassroots movements worldwide fighting social exclusion in different areas.

Juan Grabois, founder of the Excluded Workers Movement, said that the movements that will come to Rome represent three “increasingly excluded” social sectors: workers with precarious contracts, landless peasants and suburbanites and other “informal, marginalized and forgotten settlements.”

According to Grabois, the objectives of the meeting are to share the social thought of Pope Francis, discuss the causes of the growing inequality and increasing of social exclusion, reflect on the organizational experiences of movements and assess their function.

Another point is the discussion of the relationship of popular movements with the Catholic Church, in which the way of establishing a permanent collaboration with the Holy See will be analyzed.