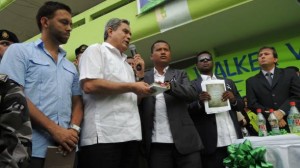 Eduardo Proaño Gracia from Alianza PAÍS ( AP ) movement. was appointed as mayor of Muisne during the first session of the Cantonal Council. For the election of Proaño in duty Articles 61 and 62 of the Code of Land Management (COOTAD) were applied.

Proaño, who was the councilor most voted last elections, took the charge won by Walquer Vera, who was murdered last Sunday in Vuelta Larga.

The meeting was set up at 16:00 in the main entrance door to the Municipality, where was placed a photograph of the late beside President Rafael Correa, who was with the National Electoral Council (CNE) vocal, Domingo Paredes, Juan Pablo Pozo and official René Maugé.

In the first session Proaño was elected Deputy Mayor; then, amid the cheers of supporters of the ruling party, Paredes took the oath as mayor.

The COOTAD says Deputy Mayor shall be subrogated to the mayor in office for temporary absence not exceeding three days; or permanently, assuming the position to finish the period.

Proaño said that in a new Council session will be appointed Deputy Mayor and the new secretary. Date for that meeting is yet to confirm.