Two million vaccines against SARS-CoV-2 will be acquired by Guayaquil from the three pharmaceutical companies evaluated by the Municipality. This Wednesday, March 3, 2021, Mayor Cynthia Viteri confirmed that 500,000 doses of the Oxford / AstraZeneca vaccine , 250,000 of the Russian Sputnik V and 250,000 of the Chinese Sinovac will be purchased . 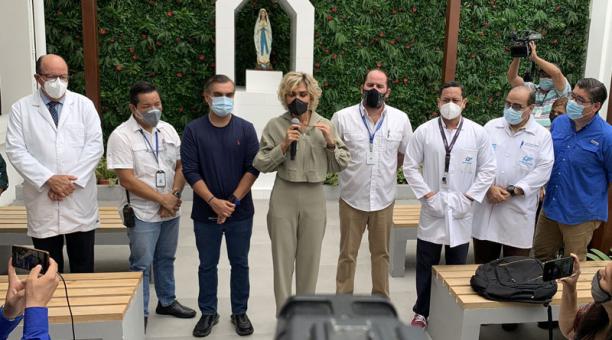 “That is the order and it is based on priority , on the availability of the product. The negotiation will be done directly from the local government with the production companies , without any intermediary , ”said the mayor. Negotiation contacts are scheduled to begin today .

The official government authorization for the purchase is still pending . Once the Cabildo receives the endorsement in writing, the vaccines are expected to arrive in the canton in 60 days. And in a month and a half, approximately, the first group will be immunized; that is, in June.

During a tour of a new therapy room at the Bicentennial Hospital, Viteri also explained that an oversight has already been established for the immunization process. This group is made up of Archbishop Luis Cabrera representing the church, Marcia Gilbert for the universities , the former Minister of Health, Luis Sarrazín; and a delegate from the production chambers .

The Municipality has allocated USD 15 million for this plan. In the country, vaccines must comply with the guidelines established by the National Agency for Health Regulation, Control and Surveillance (Arcsa). “The ones we have chosen have more than 90% security,” stressed Viteri.

The vaccines selected for Guayaquil are already distributed in countries in the region, such as Argentina, Chile and Brazil. In Ecuador, the Ministry of Health began the vaccination plan in January with the doses from the pharmaceutical company Pfizer.

Achievements of digital transformation are exposed in “A Digitized Country, A Modern Country”