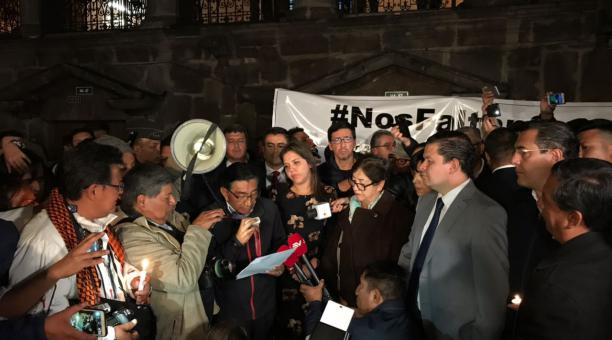 “We want them back alive!” That was the message that was heard the night of this Tuesday, March 27, 2018, in the Plaza de la Independencia during the demonstration in solidarity with the journalistic team of newspaper EL COMERCIO, kidnapped by irregular armed groups in Mataje, a border town of Emeralds More than 100 communicators attended the demonstration, which was convened through social networks with the hashtags # NosFaltan3 and #LosqueremosdevueltaYa.

Patricio Zambrano, Minister of Defense, also attended the vigil and showed solidarity with the families of the victims. He informed that this Wednesday, March 28, 2018, the National Council of Public Security, Ecuador’s highest security body, will meet to make decisions that benefit Ecuadorians. For the official, the country is going through a complicated moment in the face of attacks by irregular groups in recent weeks, as well as the kidnapping of journalists on the morning of March 26. 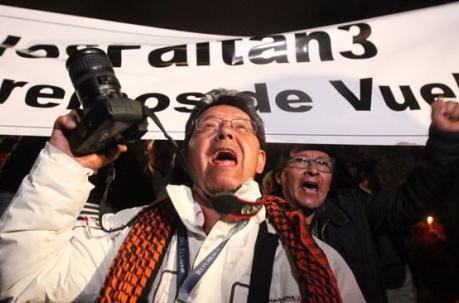 During the demonstration in the Plaza de la Independencia in Quito, the vice president of the Republic, María Alejandra Vicuña, also intervened. “We are a country of peace and we will work tirelessly to ensure that this condition is always maintained. Here is a government that is present and does not abandon its citizens.

“The communicators delivered to Vicuña at the vigil a manifesto with seven points in which the State is asked to safeguard the security of the citizens and even more of the journalistic teams that were covered in the conflict zone. She welcomed them and assured that she will expose them on Wednesday during the meeting of the National Council of Public Security.

At the end of the intervention of the official, the demonstrators continued in the Plaza de la Independencia with the vigil of solidarity. They called another sit-in to be held on March 28, at 7:00 p.m., in the same place.

The Interior Minister, César Navas, appealed to the national unit to face the kidnapping of the newspaper team of EL COMERCIO, which took place on Monday. “On behalf of the National Government, we call the national union to better cope with this situation and that Ecuador continues to be a country of peace,” he said at a press conference Tuesday at the Carondelet Palace.

According to the official, the three collaborators of this newspaper were intercepted by unknown persons, after passing through the military checkpoint (of Mataje). “They received the warnings corresponding to the risk of circulating in this area of the international political limit,” he said. The journalists were in Ecuadorian territory when they were kidnapped. The military control referred to by Navas is located approximately 1 kilometer and a half from the population.

This is the last point where the State has a permanent presence of the military and police. Near that detachment occurred the attack that killed the lives of three sailors, on March 20. Since then, the soldiers and agents have not entered the town. Navas informed that circulation will be restricted for those who are not inhabitants of the area. And he talked about reviewing the security protocols for the journalistic exercise.

Now, the authorities are investigating the circumstances of the abduction and the possible perpetrators. Navas informed that there were already approaches with the kidnappers and that the communicators “are in good health”. He did not give more details, because he said that a security protocol is followed. “The Government does not skimp or spare an effort to protect the life and integrity of our fellow citizens.” Another detail that was known is that the journalists were transferred to Colombia. That is why a work was activated in conjunction with the authorities of the neighboring country.

After the kidnapping was confirmed, embassies, public institutions, international organizations, journalists, politicians and citizens expressed their messages of solidarity to the families of the journalistic team and to this Journal. On Tuesday different people and entities demonstrated in social networks, as well as in the different vigils in several cities of the country. (I)