National mobilization against the approval of constitution changes 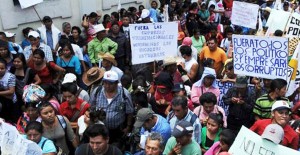 Groups opposed to amendments to the Constitution will, again, take to the streets to protest, Their goal? Fencing the National Assembly.  Workers, indigenous people and peasants, doctors, students, seniors, retired military and women … they reiterated their call for mobilization. And they say they are ready.

They had announced the convocation of a major national strike of workers and the indigenous uprising. They were just waiting for the confirmation of the date for the vote on the package of 16 amendments to the Constitution.

“The indigenous and popular uprising is activated,” said Severino Sharupi, leader of the CONAIE territories.

“Those who can” will arrive today to Quito and will concentrate at El Arbolito park, a few blocks from the Assembly, from 16:00. The others will remain in their provinces, “but everyone will do something,” he told to Daily Expreso. “The streets, squares and roads are our spaces for struggle,” insisted the leader.

Banana unions of the Andean area demand a better treatment