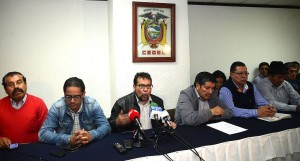 Pablo Serrano, spokesman for the United Workers Front (FUT), reported that the National Collective of Trade Unions, Indigenous Peoples and Retired Employees activated three actions yesterday in protest to the process of constitutional amendments: indigenous uprising, popular mobilization and a strike that will include road closures.

The leader regretted that the assembly members of Alianza PAIS (AP) are “shielding themselves.” “There are not satisfied with having police and military protection, but they are bringing conditioned and paid people to demonstrate they do have the support of the people.”

While Jorge Herrera, president of the Confederation of Indigenous Nationalities of Ecuador (CONAIE), assured that the uprising began yesterday in the Amazonian provinces and that the protest action will be gradual. These groups were scheduled to be installed since last night outside the Assembly.

Government majority expects to approve the amendments in one day