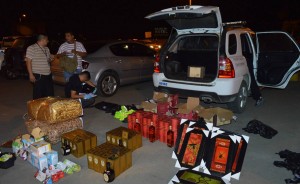 A police car and a private vehicle were detained as they drove down a street in the Arenillas county. Four policemen used them to transport illegal goods of Peruvian origin.

Intelligence staff of the police reported the fact to the Customs Control Service of this jurisdiction. The goods did not exceed ten basic wages and the case was considered as a customs offense.

Raymond Quelal, head of the Narcotics Police of El Oro, explained that inside the police car six boxes of whiskey, quilts and paintings were found, while in the private car there was a gun, cash and police documents.