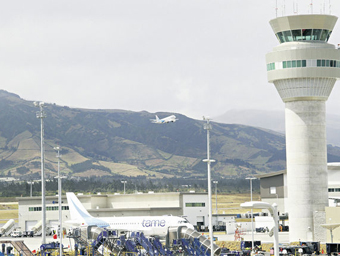 The works of construction of the second phase of the airport Mariscal Sucre, located in the Valley of Tababela, in the northeast of Quito, which include a large room of pre-boarding, yesterday began once it was determined that the number of passengers increase by 51% during  peak hours.

The new rooms of pre-boarding will be  operational from July of next year. The load platforms also will be expanded in order to meet other frequencies  with larger aircrafts, which will help in the export operations in 2014.

Quiport reported that the enlargement comprises an area of 14.000 meters and its design is intended to park up to two aircraft of the category E, i.e., aircrafts type Boeing 777, 747 or Airbus A340. The extension of the terminal will have 5 260 m² and the investment will be $15 million.

Negotiations with European Union are postponed until January