New amendments plan would be processed in the assembly 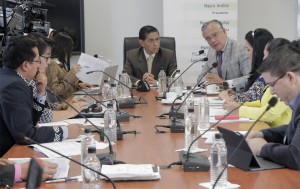 Legal Secretary of the Presidency, Alexis Mera, said that the second package of amendments would be treated again with the “amendments” mechanism, by the assembly members.

Mera ruled out the referendum just “for agility questions.” “For example, we want to propose to the country that it is not necessary that supervisory authorities are elected in the Participation Council through citizen commissions of election. The Constitution does not require a referendum in this cases.”

The Presidency official said they are evaluating and reviewing with legislators the points to be presented in the coming days for this new package of amendments. Mera insisted on an amendment to the role of the Ombudsman that, at the moment, seems a court.

Local intellectuals ask for respecto to citizens will