New hearing of protest on September 17 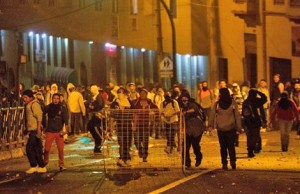 On November 17 will be held the audience of judgment and opinion in support of the case that continues for the alleged crime of attack or resistance against the 31 young who participated in the demonstrations organized by trade unions on September 17 in the vicinity of the historic center.

The decision was taken by the Flagrancy court, where the complaint filed by the Ministry of Education is processed. According to the trial record, the prosecution last week ordered the closure of the last stage of preliminary investigation.

So far, versions have been taken, videos and photos provided by the media have been incoroporated to identify the alleged participants in the demonstration, which was organized against an alleged increase in bus fares and labor rights, in the September 17th protest in San Francisco de Quito, said Mauricio Garrido, lawyer for one of the accused students.

If proven the crime, the group could go to jail from six to two years, as established by the Penal Code (art. 283). If the offense is committed in groups and in a planned way, the defendants could be sentenced to up to three years.