BREAKING NEWS
Ecuador will propose to Donald Trump a ‘regional strategy to combat drug trafficking
Coronavirus begins to leave losses to small shrimps
In the Guayas Court, eight witnesses were presented in the Bribes 2012-2016 case
Ecuador and the United States strengthen cooperation ties
A plane inspired by the ‘Star Wars’ saga landed at the Quito airport
Firms look for more car sales this year
A legacy of Correa: calcium chloride
The political quota abroad borders 40% for ambassadors
Viaja Ecuador, the commitment to promote tourism in the country
Ecuadorian coffee falls dramatically in harvest and sale

New karankis and kayambis designs are shown on the runway 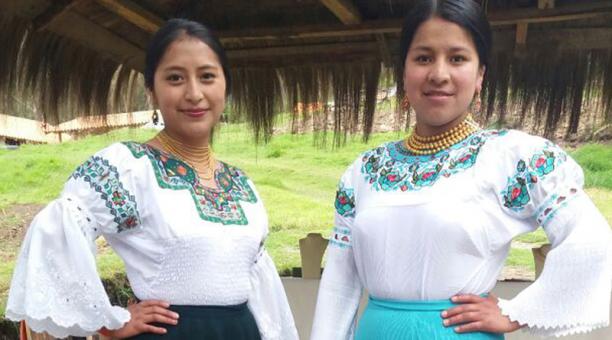 Mercedes Molina is the matriarch of three generations of skilled embroiderers from the south-east of the capital city of Imbabura.

The septuagenarian woman, a native of the Kichwa community of La Magdalena, wore anacos (skirts) with sheep’s wool to sell them and help maintain the home.

While with her right hand she holds the carding, she tells in Kichwa that she also made the traditional costumes for her eight daughters.

The taste for embroidered blouses with colored threads and pleated skirts-typical of the karanki and kayambi clothing-was inherited by six of his descendants. Four of them know about the design of these garments, because they have warehouses of this variety of clothes.

They organized a first fair and catwalk of Karanki and Kayambi indigenous clothing, which was held last weekend. The fashion event took place in the corridors of the El Pondo tourist center, one of the most sought after in the Angochagua parish.

Esther Tambi, daughter of Molina, points out that the costumes of Karanki and Kayambi women are similar. In both cases it consists of a pleated anaco, an embroidered blouse, a shawl, a hat and espadrilles. The embroidery of the karanki shirt has a more geometric pattern than the other.

She knows the subject because although she belongs to the first town she learned to make kayambis garments. Her husband also belongs to this nationality.

For this reason, in the González Suárez parish, in Otavalo, which is within the kayambi ancestral territory, he opened the Warmi Wasy store (Casa de la Mujer), which dresses the ladies of the villages.

In this family business, Sofía Tocagón, daughter of Esther Tambi, has been linked to the business. Although trained as a clinical psychologist, she is dedicated to the design of innovative garments, without neglecting the essence – in colors and shapes – of the costumes of these ethnic groups.

The experience allows Tocagón to decipher the tastes of its clients. He explains that while the Karanki woman prefers the figures inspired by nature, the kayambis like more elaborate forms, like the Andean icons.

One of the most popular among young women is the Chacana or Andean Cross carved on the neck of the blouses. Others, on the other hand, show shapes that represent the sun, snails and squares that symbolize the universe.

Over time, the embroidery of blouses and skirts went from manual work to sewing machines, reflects Molina. (I)