New package of amendments would be ready for January 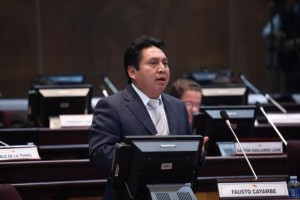 The coordinator of the ruling party in the Assembly, Fausto Cayambe, said that the Alianza PAIS block is analyzing the new amendments to the Constitution, which would be ready for discussion for January in a one day workshop.

The content of eight amendments has been spread, although they could be more, Cayambe said.

It is envisaged to amend Section 7 of the Constitution on the Ecuadorian citizens born abroad to Ecuadorian parents, and their descendants to the third degree of consanguinity. Through this amendment it is sought to solve the problem of the children of immigrants born abroad and the dual nationality.

Section 186 of the Constitution is also expected to be modified, in order to increase the number of judges of provincial courts, to address the causes in the territories. Another modification would be directed to Section 203, paragraph 1, of the persons deprived of their liberty, to ensure consistency with the type of crime and misdemeanor, as established in the COIP.

It is also envisaged to amend Section 322 on intellectual property of ancestral collective knowledge. The amendment would only ban the ownership of genetic resources that contain biological diversity or agrodiversity.

In addition, the amendment on political control of the state entities, which is not in conformity with the Constitution: among which are the IESS or the coordinating ministries.