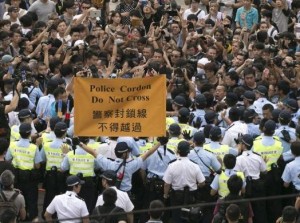 The police in Hong Kong opened today another route to traffic from the financial area after removing new pro-democracy protesters barricades.

Just after 05.30 local time (21.30 GMT Monday), about 250 officers proceeded to open ways to the traffic in the district of Causeway Bay, where half a hundred of protesters spent the night outdoors.

The agents authorized them to continue there, although they ordered them to free one of the main ways they occupied. “They simply said that the cars would arrive later and they did not intend to evict us. They said that we can stay,” said one protester to AFP.

Later, around 10.00 (02.00 GMT), hundreds of policemen proceeded to remove barricades set up on Queensway, a way of high traffic density in the financial center of the city.

This would be the second operation of the day to restore normality to the streets when 17 days from the start of the occupation are met.

International Donor Conference raises $ 5.400 million for the reconstruction of Gaza

Remains in pits does not belong to missing people from Guerrero