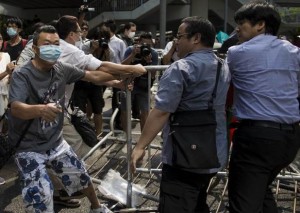 Several hundred opponents of the pro-democracy movement in Hong Kong today faced dozens of protesters trying to topple barricades and a group of them was arrested by the police.

About 500 people pro-Beijing began to bring down the fences in one of the streets in the Admiralty area, where most of the protesters remained settled at early hours in the afternoon.

Dozens of protesters tried to stem the avalanche, which went on to become a confrontation between both groups.

Several of the opponents to the protests covered with masks, which according to students, belong to groups of Pekin’s government supporters, were arrested.

With the incidents that occurred today, 16 consecutive days of protests in the city are met, where students demand a genuine universal suffrage for the 2017 elections, where they will choose the next head of the local government of Hong Kong.

US: Hospitals should be prepared to detect cases of Ebola