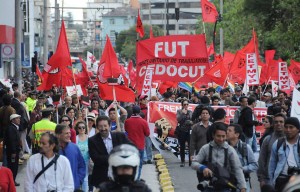 Workers who are hired by the public sector shall be governed by the Organic Law of Public Service (LOSEP) and not by the Labour Code, and the regulation that states that public servants can not benefit from collective bargaining are the main changes made to the Constitution in labor issues, through the amendment adopted last Thursday.

The government majority together with their allies changed Sections 229 and 326; additionally, they included a transitional provision. Meanwhile, the transitional gives a term of 180 days for the Assembly to adopt amendments to the laws of the public sector to couple them to the amendment.

In his argument before the Commission on Amendments, the government supporter Fausto Cayambe said that removing the third paragraph of Section 229 would end with the discrimination and inequality in the public sector, and assured that the International Labour Organization (ILO) recommends to the states members to stop using the category of laborers by being obsolete.

Instead, the amendment to paragraph 16 of Section 326 incorporates more rights as the strike for the entire public sector (applied only for laborers), said the legislator.