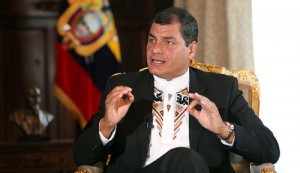 Through a decree signed by President Rafael Correa, yesterday the Coordinator Company of Public Enterprises was created, whose goal is “to plan, articulate, coordinate and validate the policies and actions in all public companies … and those that are going to be created, or dissolved.”

In July 2014, Correa had already announced the creation of a holding company to coordinate the work of public enterprises.

However, in April this year, the National Secretariat for Planning and Development (Senplades) stated: “Given the international economic context the creation of this body has been postponed while the relevance of its creation continues to be assessed.”

Now, according to Executive Order 842, the new coordinating company will have a patrimony made up by assignations from the General Budget.

According to the decree, this body will have a board formed by three members: a delegate from the National Secretariat of Public Administration (who shall preside it), one of the President of the Republic (in this case, Jorge Wated Reshuan, former General Manager of the National Finance Corporation) and a representative of the Senplades.

The board president, as specified in the document, will be the Coordinating Minister and member the Cabinet of Ministers. It is also mentioned that the board chairman will be the president’s representative on the boards of coordinated public companies.