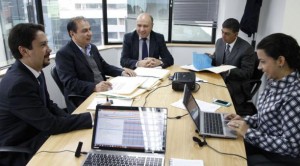 On December 4, 2014 the National Salaries Council (Conades for its Spanish acronym) will meet to analyze and determine the salary increase for employees of mobile telephone companies, which will be applied from 2015.
On Friday, November 28, the Conades held the first meeting for analysis of salaries and definition of this sector.

The three members of this entity attended: a representative of employers, one of workers and one from the government.

Xavier Estupiñán said on Friday that there was no consensus and the next meeting will be held the following week.
Estupiñán noted that it would exist a gap in salaries between the companies.
“There must be done an adjustment with the objective of the salaries to be equitably. In any case, there would be significant increases, but these have not yet been quantified and eventually we will let people know.”

Legal review of agreements between Ecuador and the EU continues