Nicolas Issa on Teleamazonas Board 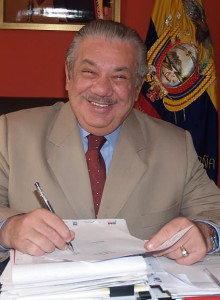 Since yesterday, the ecuadorian media channel Teleamazonas has a new Board after banker Fidel Egas no longer owned it on October 20.

The main news of this event is the designation of the former ambassador of President Correa in Madrid, Nicolas Issa Obando, as member of the Board. His son, Nicolas Issa Wagner, is also in the group of the new shareholders.

Obando stated, “My desire is to support Teleamazonas enter into a new life stage with the best possible conditions.” The head Director of the Board is the businessman Nicolas Espinoza, former president of Quito Commerce Chamber. The new additions to the Board would serve for a period of five years.