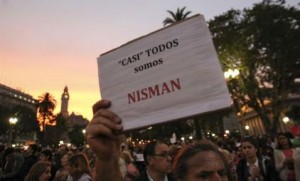 In an announcement published in major Argentine newspapers entitled “The right to truth,” cultural, economy and politicalrepresentatives asked the Supreme Court to take “control” of the investigation of the Nisman and the AMIA Jewish center cases.

“May the Supreme Court (takes the) control in the final clarification of the AMIA case, complaints and death of Alberto Nisman,” asks the text.

Furthermore, in the text is claimed that the legislative committee, which was going to receive the prosecutor on that Monday, now listens to its collaborators “for details on the foundations of the charges” against the Argentina President.

The announcement was signed by prominent opposition figures and presidential candidates Mauricio Macri and Sergio Massa, besides the AMIA itself and other Jewish organizations.