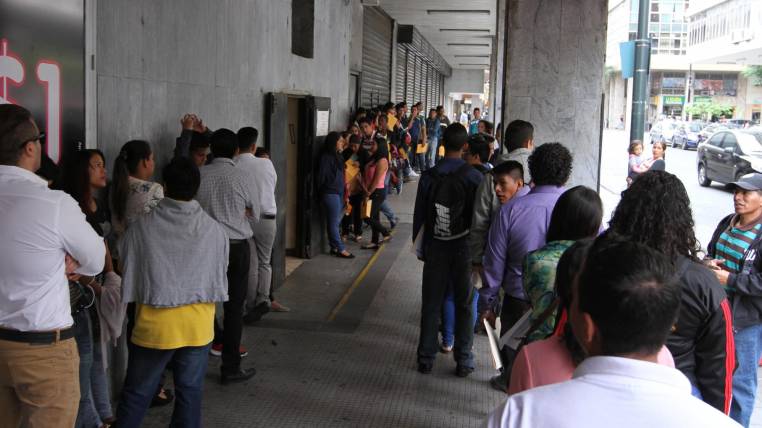 The Government has projects to create more jobs, such as incentives to hire more young people. President Lenin Moreno in the campaign offered some 250,000 new jobs per year, one million under his mandate. For this to happen, employment figures must have significant growth, but this is not the case.

The Labor Indicators report of December 2017, from the National Institute of Statistics and Censuses (INEC), says that the gross employment rate, which measures the absorption capacity of employment in the economy, did not register statistically significant annual variations at the national level nor by area of residence.

In December 2017, the gross employment rate was 64.6% nationally, in the urban area it was 62.0% and in the rural area 70.6%. In the same way, there were no statistically significant annual variations in the participation rates. For the advisor of the Chamber of Commerce of Guayaquil, economist Francisco Briones, what the gross employment rate says is that only 6 out of 10 Ecuadorians of working age have a job. This can be due to several factors.

One is that they have no desire to work, another that they are without work. “In general, when there is a lot of job offer this indicator increases as it encourages job seekers even those who have not yet done so,” explained Briones. He added that when the supply of employment is reduced, this indicator could be reduced given the potential increase in unemployment and the discouragement of workers.

To improve this indicator, basically, what is needed is for economic policies to be in tune with the productive reality of Ecuador. Hiring schemes with greater flexibility would be very useful, for example. “Another way to generate employment is the commercial opening that would increase the economic and productive activity of the country,” said Briones.

Another economist who believes that there are no good signs indicating that one million jobs can be created in four years is Jorge Calderón. He said that the economy has not grown enough to absorb those who already work and those who want to enter. The normal thing is that every year there is mobility in the labor market, but the economic environment causes many people to delay their retirement, while young people seek to enter.

Calderón stressed that consumption is low and this also influences that new jobs are not created. So, there is an x-ray that indicates that the economy has not yet taken off, despite the announcements and incentives mentioned by the Government.

The figures of the INEC support the opinion of several economists in the sense that the economic growth that has occurred in recent quarters, to be based on an increase in public spending (in turn, largely financed with new debt) and not in greater investment, it is not accompanied by an important creation of quality jobs.

In fact, except for a slight drop in the unemployment rate, the INEC publication shows that between December 2016 and the same month of 2017 the Ecuadorian labor market practically remained unchanged, which in itself is already bad news. According to the INEC, the national unemployment rate is 4.6%, that is, 0.6 points less than in December 2016.

This will be highlighted as an achievement, but it must be taken into account that while look for employment, people even sell juice. There the person does not count it as unemployed, but in the ranks of inadequate employment.

9% unpaid employment in this category are unpaid workers in the household. (I)