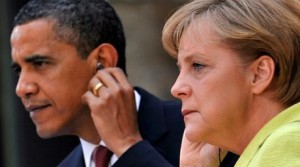 The US President, Barack Obama, and the German Chancellor, Angela Merkel, consider that the solution to the crisis in Crimea is the direct dialogue between Russia and Ukraine, as well as by sending international monitoring to this peninsula, informed the White House.

In the statement from the White House about the telephone call on Friday, there is not any mention of possible sanctions against Russia if they do not  give up theirmilitary deployment on the Ukrainian peninsula of Crimea. On the other hand, Merkel has opted to avoid the sanctions and try to find a solution through dialogue and diplomacy.
This is the third phone conversation between Obama and Merkel on this issue in less than a week, since they already spoke last Sunday and Tuesday.