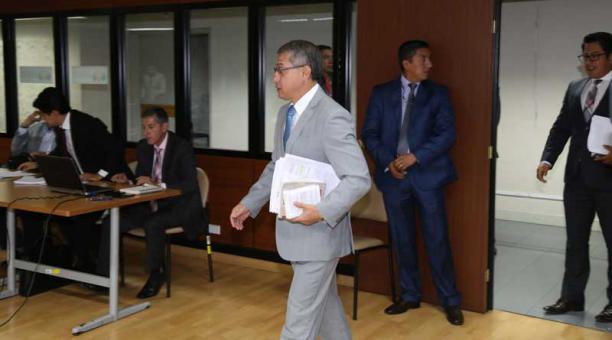 Prosecutor Carlos Baca defended on Thursday, January 18, 2018, the investigation that made the former Comptroller Carlos Pólit, accused of an alleged crime of concussion in the Odebrecht case. “If the lord has any enmity with me to prove it. I am going to prove in this hearing who his greyhounds (dogs) are, who come out to bite him,” he said.

His words earned him a wake-up call from Judge Luis Enríquez of the Court of Justice, who led the preliminary hearing on Thursday against the former official, his son Jhon Pólit and businessmen Mauricio Neme and Estéfano Isaías. In that proceeding, Baca accused the former comptroller as the author of concussion, an offense that is set when an official orders or demands the delivery of economic benefits illegally. A Polit son accused him of being an accomplice of this illegal act. In contrast, Neme and Isaiah were not accused.

The Prosecutor said that he abstains in an act of “absolute justice”. Before Baca could explain the reasons for his judicial pronouncement, Judge Enríquez ordered that a request be handed over by Hernán Ulloa, lawyer of the former Comptroller. The defender requested the change of prosecutor for a supposed “partiality” and “lack of objectivity.” In the letter, which was released on Tuesday, Ulloa made reference to Baca’s statements, in which he blames Pólit father for having disseminated an alleged report with indications of criminal responsibility in which he would be mentioned.

On January 18, the Prosecutor described as “desperate” the request made by the defense of Polit and, in the presence of the judge, urged him to tell the truth. “I cannot ask for procedural loyalty to an offender, but I can ask for a lawyer.” And he said there is “no reason” for him to be excused from handling the case.

Ulloa denied that nor him or his client are behind that apparent report with criminal responsibility against Baca. After hearing the arguments of both parties, Judge Enríquez rejected the request of Ulloa and confirmed that the actions of the Prosecutor’s Office were made within the framework of the law. Once this incident was over, Baca numbered all the evidence he found against Carlos and Jhon Pólit. In total, the official presented 20 evidences.

Regarding the son of the former Comptroller, the Prosecutor assured that his participation consisted of “placing” a part of Odebrecht’s money in the financial system. This would have materialized through the companies Plastiquin and Cosani.

The first is related to Neme and the second is related to Isaiah. Baca clarified that neither of the two businessmen knew about the illicit origin of the funds. According to the Prosecutor, Polit son would have deceived them by making them believe that the money their companies received came from a company.

According to the file, in 2014 Platiquin received USD 700,000 from Klienfeld, ‘offshore’ from the Odebrecht bribery department. While Cosani was transferred USD 1 million in two payments. According to the Prosecutor, Neme and Isaías identified Pólit hijo as the ‘broker’ (financial agent), who offered them “legal funds” at an annual interest rate of 5%.

Odebrecht reporter José Santos had already confessed that the Brazilian construction company paid USD 10.1 million to the then Comptroller. Now, that version is also part of the evidence of the Prosecutor’s Office. How was that money paid? The investigations indicate that Polit first demanded USD 6 million in 2010. That year, the Brazilian firm was trying to return to the country after its expulsion for the failures in the construction of the San Francisco hydroelectric plant. In this negotiation, Baca also mentioned that Odebrecht made a payment for USD 2 million to “another official” and that this is part of another case.

In December of 2017, at the trial hearing against former Vice President Jorge Glas, the Attorney General mentioned that it was the then Vice President who demanded that amount. A second request from Polit would have occurred in 2012. According to the Office of the Prosecutor, this time it requested USD 4.1 million to “get clean reports” in the works that Odebrecht managed: Poliducto Pascuales-Cuenta, removal of lands from the Pacific Refinery, aqueduct La Esperanza, Dauvin Transfer and the Manduriacu project. During the first part of the hearing, Ulloa rejected that his client wants to judge him “again” for facts that – in his opinion – were already investigated in the trial for illicit association where Glas is linked.

At the end of the day, Judge Enriquez called Polit and his son to trial. In the next stage the hearing is scheduled to know if those involved are sentenced or not. The process on Thursday is the second in which the former Comptroller is investigated.

The case of concussion is one of the six processes that is in the public phase of investigation in the Odebrecht plot. Polit was also called to trial in the case of conspiracy, but is suspended until he is arrested. (I)