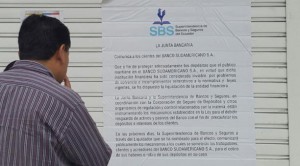 The Attorney General’s Office will be responsible for defining the process to be given to the case of the liquidation of Banco Sudamericano. On Tuesday, the Superintendency of Banking and Insurance (SBS for its Spanish acronym), referred the report to the entity.

The liquidation of Banco Sudamericano was based on an audit performed by the Risk Direction of the SBS.

From the observations done, three major problems were evidenced. The first, the problems in the credit delivery because according to the SBS, it was found that the bank does not do the verifying process before the delivery of credits and it is unclear how it assess the applicant’s ability to pay.

There are also problems with the bank’s liquidity, especially when it has to do with information delivery.

Furthermore, the entity says it has detected alleged weaknesses in the provisions and actions of the Board, to meet the standard on prevention of money laundering.

The report detailed that “from the review of the origin of the the capital increase funds resolved by the Board at its meeting of December 27, 2013, unusualness are determined (…) a situation that creates the risk exposure of money laundering by the analyzed entity”.

Carlos Paredes, President of the Banco Sudamericano Board, said on Tuesday at a press conference that “the position of iliquidity (of the bank) is false”.

Report on Monetary Code is ready