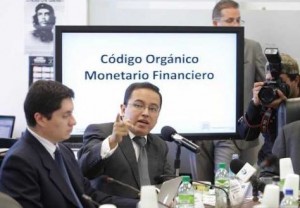 The Monetary and Financial Code was sent yesterday to the Official Register by the National Assembly, in order to be published and becomes a law of the Republic.

The Code, approved by the Assembly on July 24 by a government majority, has 520 items, it contains the creation of the Board of Policy and Monetary Financial Regulation as a legal entity under public law, part of the Executive Branch.

It also includes other items that delegates control to the Superintendency of Banks of the Severance Security Funds, public and private, to attend the general interest and be subjected to legal regulations.

This item was part of President Rafael Correa’s veto and was not debated in the plenary of the Assembly.

The new Code will be printed in the course of this week but it already entered to layout. “Because of its extension, it will take a couple of days,” confirmed Hugo del Pozo, Director of the Official Register.