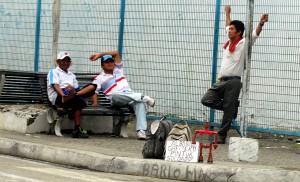 The regime prepares a bill to create an unemployment insurance, without anticipating how it will be funded, who will have access to it, or other details.

The announcement was made by President Rafael Correa on Tuesday in Guayaquil, during a discussion table with media.

Superficially, he reported that the bill will ‘soon’ be sent to the Assembly as an economic urgency, because his government has “almost ready”.

Yesterday, this newspaper tried to delve into the issue with Minister of Labour Leonardo Berrezueta, who was addressed after an interview on Radio America in Quito.

He confirmed that the project is part of policies that seek to “take care of jobs and generate more jobs,” but declined to advance its content or the date when it would be ready.