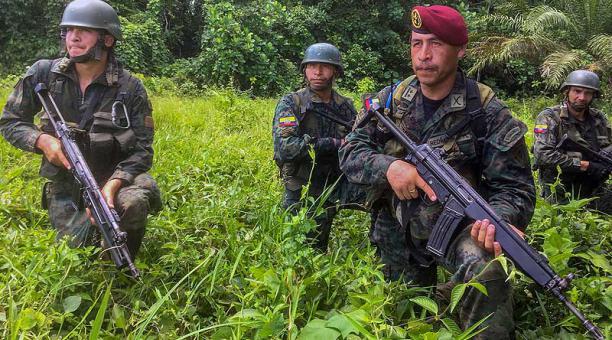 There is not a Colombian-Ecuadorian or Ecuadorian-Colombian border but a global border system where the drug that leaves Tumaco reaches Central America, passes from Guatemala to the border of Mexico and then to the United States. And if the drug, as is generally the case, goes to Europe, it will go to Brazil and then to the countries of Africa.

Each section of the border is absolutely articulated to the other. This global border system acts from the perspective of illegal markets, irregular migration, human trafficking, smuggling, arms trafficking and everything that is linked to the drug trafficking industry. All this came to Ecuador for a long time but unfortunately we did not want to face the problem.

Four points of discussion revolve around the phenomenon: the internationalization process, the location of the current crisis, the characteristics of the global crime network and the controversial solutions.

Ecuador was considered during the last century as an island of peace, a kind of myth, because our neighbor to the north had the FARC, the ELN and other irregular groups that were in conflict with the State; Shining Path and the MRTA were in the south, while Ecuador did not manage to contaminate itself.

In 1998, Ecuador and Peru signed the peace agreement, which closes a period of very conflictive history that basically revolved around the territorial delimitation. In that sense, the doctrine and logistics of the Ecuadorian Armed Forces were organized under that perspective and the impression is that they did not manage to catch up with the new threats.

One year after the signing of the peace, the president of Colombia, Andrés Pastrana, signs Plan Colombia with his counterpart from the United States, Bill Clinton. The agreement has at least two elements of internationalization of the conflict: Ecuador built the Manta base and Colombia set up seven military bases. The Manta base was destined to fight drug trafficking and the conflict with the guerrillas of the FARC and ELN. In 2000, when the presidency of Álvaro Uribe took office, an escalation of confrontations began and what many authors called the balloon effect appeared: it was pressed on one side but expanded on the other, representing a never ending vicious circle.

At that time Ecuador had been basically a country of storage and transit of drugs. The country’s policy was to close its eyes, but with the balloon effect the problems began because some of the laboratories in Colombia moved to Ecuador, which the country added to the transit and storage of cocaine production. With the economic crisis that affected Ecuador (1999-2000) and that led to dollarization, another problem was added: money laundering from drug trafficking.

Another effect produced by Plan Colombia is that although coca plantation areas were partially reduced, production increased due to the development of technology. The production was no longer directed exclusively to the United States, but sought new markets such as Spain, which became the first country of per capita consumption of coca in the world, and the United States. It remains the largest consumer in absolute terms. This is how consumption began to globalize in Australia, in Africa, Europe and Asia. That is, a new situation was added: drug storage, transit, washing, production in laboratories and now consumption.

Our country is between two producing countries like Peru and Colombia and is contaminated with the internal conflicts of these countries. It is not uncommon that in a relatively short period of time, if no policies are established in these borders, we start to have similar problems.

Ecuador is located in a strategic place between the two largest coca production countries in the world but it is also located in front of the largest market that is the United States, through the Pacific corridor.

An advantage for the cartels is that it is a relatively small country but with a very good port infrastructure and that makes it a sort of international platform where the big cartels of the world arrive.

We have detected that in the country there are 23 cartels coming from Mexico, Colombia, Brazil, Italy, Spain and Russia. The cartelization of Latin America is impressive and is a first idea of what the internationalization of drugs means.

The second hypothesis that explains the internal boom of violence revolves around the Colombian peace process. The problem does not come from the FARC dissidents themselves, but from the lack of action by the Colombian State to comply with the agreement’s commitments and to cover the territories that the guerrillas left. The absence of the state has led to an increase in the dispute over these territories. There are 12 groups, among them Óliver Sinisterra, led by alias ‘Guacho’.

The proposed military solution can lead to the unification of these 12 groups and begin to generalize the conflict and war.

Another concern is related to the electoral process that Colombia is going through and the possible consequences: what will happen if in two months the presidential election wins Iván Duque, candidate of the Democratic Center of Álvaro Uribe party? Well, a process of dismantling the peace will come.

Faced with these scenarios, military departures that are raised call attention. The government stated that this is the product of its efficiency, then said it was the Sinaloa cartel and finally ended with ‘Guacho’. Today gives the impression that everything is focused on ‘Guacho’ and that it will end up being a kind of scapegoat because it seems that they will take it, as the President of Colombia himself said, alive or dead, but the conflict will not be resolved.

All this increases the confusion, because in Ecuador we have not followed this process, there has not been Intelligence, there have not been investigations. It is not understood how a multidimensional phenomenon can be confronted unilaterally. Experiences such as the Mexican case, when in 2008 presidents Felipe Calderón and George Bush signed the Mérida initiative and declared war on drugs, did not take effect. The plan, in which Mexico put USD 13 billion and the US, 1.5 billion, focused on the northern triangle of Central America, Guatemala, El Salvador and Honduras. What we have years later is one of the most violent areas in the world, which has caused 75 000 deaths and 30 000 missing and with a global network of organized crime that has grown impressively. (I)