Five people were detained, this Wednesday, June 25, 2020, in an illegal mining control operation , in the Aztec canton of Pucará . In addition, four makeshift camps , explosives and tools used for this activity were destroyed . 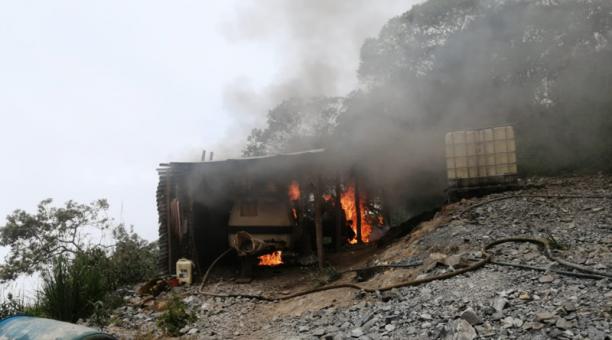 Personnel from the Mining Regulation and Control Agency ( Arcom ), the Azuay Prosecutor’s Office, the Interior, the National Police and the Army participated in the operation. They entered Pucará and from there they ascended to the Cerro Negro sector of the San Rafael de Sharug parish.

The area is difficult to access, it is located more than 3 700 meters above sea level, and people walked more than three hours to reach the site. There they found the makeshift covachas – built with zinc plates – scattered and hidden among the vegetation.

Between the first and the last ditch there was a distance of eight kilometers, it was reported from the Third Division of the Tarqui Army . Each cavern had a capacity of between 10 and 15 people and inside it had improvised beds and space for cooking.

Near those camps were people carrying out open-pit mining activities, without permits and causing contamination of water sources, due to chemical and heavy mineral discharges that have no treatment, said a military man who participated in the operation .

For the past three weeks, intelligence personnel from the Third Division have been conducting investigations . In total, six compressors, an electric generator, 900 detonators, 568 sticks of dynamite, 47 quintals of ammonia nitrate, a grader, 10 fuel tanks, hoses, drills, graders and other tools were seized .

In addition, in the first camp they located a 400-meter pit and in the third, William and Rodrigo L., Manuel N., Rodrigo B. and Daniel S. were detained.