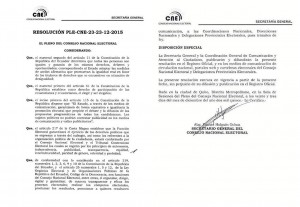 Twelve political organizations opposed to the Government formally complained to the National Electoral Council (CNE) by the call to vote for the 35 list, of the ruling Alianza PAIS (AP), made by President Rafael Correa during a public event.

“… Vote with more conviction than ever for the citizen revolution. Vote for the 35 list to continue this historic change!” said the president last Tuesday during the inauguration of a housing project in Los Rios.

On December 23, the CNE issued a resolution to regulate the elections pre-campaign. Seven sections of the resolution provided “the immediate suspension of advertising of any kind in pre-campaign or anticipated campaign events, paid or free released through the media, ordered by people not authorized,” by the CNE. The election pre-campaign was forbidden and political subjects were warned they would be charged with the electoral spending.