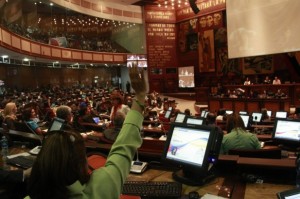 With a majority of the ruling party, the budget for 2015 was approved in the National Assembly yesterday with USD 36,317 million. The document was criticized by the opposition assemblymen.

The Assemblyman from the Movement Concertación, Ramiro Aguilar, said that the budget includes 35 investment projects worth USD 1 208 million, which actually will be running costs as school feeding, talents training and radio programs. For Aguilar, the risk is that these expenditures are financed by debt, which is prohibited by the Constitution.

The opposition legislator Luis Fernando Torres, qualified as optimistic the projection of the Ministry of Finance for the next four years. “Pungarayacu is in the limbo, no company is taking over with it. Petroecuador has not find a company that finances the ITT (block 43),” Torres said.

Henry Cucalón, Assemblyman from the Social Cristiano-Madera de Guerrero party, said: “It is unlikely that the government’s goals are met.”

The Assemblywoman for Unidad Plurinacional de las Izquierdas, Lourdes Tibán, explained that the State must provide the Social Security USD 1766 million for the payment of subsidies for pensions and health care for retirees, howeever, she indicated that only USD 1100 million were budgeted.

Assemblymen from the ruling party defended the government projections. The Assemblyman from Alianza País (AP), Virgilio Hernandez, said that the government will focus on strategic sectors. “In 2018 the deficit will be of 0.01%, i.e., almost a fiscal balance because large hydroelectric enterprises will be operational and there will be less need for debt.”