During 2020, a year marked by the pandemic, total trade in goods fell in Ecuador by 15% , however, the balance of the trade balance was favorable for the country with a surplus of $ 3,240 million , according to Bank figures. Central del Ecuador (BCE) collected by the Ecuadorian Federation of Exporters (Fedexpor) , which highlights a historical surplus in non-oil exports of $ 641 million . 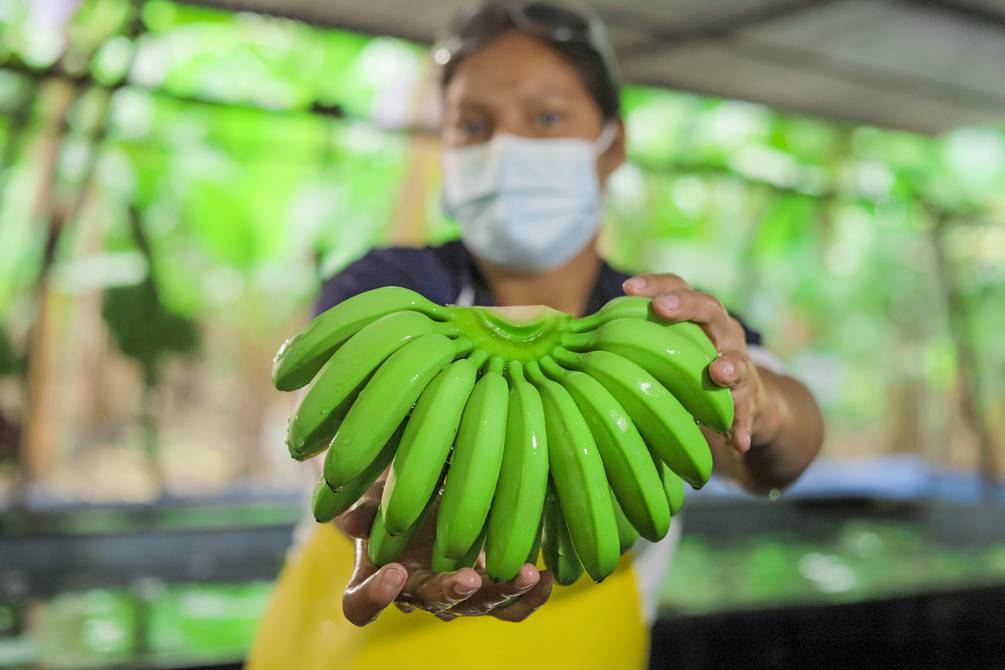 However, there were non-traditional products that marked unprecedented growth in 2020 and are classified as revelations by Fedexpor.

These are the orito banana, cocoa paste and ginger .

In the case of the Orito, which according to data from the Ministry of Agriculture and Livestock (MAG) has 5,456 hectares of surface planted nationwide; Last year it exported $ 296.4 million , marking a growth of 169% compared to what was exported in 2019.

José Antonio Hidalgo, executive director of the Association of Banana Exporters of Ecuador (AEBE) , highlighted that from 2010 to 2020 the Ecuadorian export of Orito bananas went from 7,659.01 tons to 465,5909.1 tons.

For his part, Arístides Rosales, Director of Operations of the exporting company EARTHFructifera , indicated that the main actor for the growth of fruit exports is the transnational Dole , both for the United States and for Europe.

“The demand for other destinations such as Europe also has a tendency to increase, although more slowly. For its part, China maintains normalized orders ”, explained the exporter, who assured that the preference for the orito in those markets is given by the flavor, the ease of consumption because it is smaller than the finger, the knowledge of its nutritional contribution and for being an economic product versus other fruits.

Currently, according to Fedexpor, there are 44 companies , 7 of which joined in 2020; that export orito to 35 different international destinations; The United States, Russia and China , among the main ones.

As in the case of the Orito that year, 4 new exporting companies were added to total 23 that send the semi-finished cocoa to 28 different destinations, the main ones being the United States, Argentina and Japan .

For Francisco Miranda, president of the National Association of Cocoa and Industrialized Exporters of Ecuador (Anecacao) , the opening of markets for products with added value, such as cocoa paste, is a trend that has been growing in recent years.

“The percentage of exported product has increased slightly, but with the entry of new players to the processing market, one of them the Ecuakao company , it has been possible to exploit this market, which was previously much smaller,” said Miranda.

Meanwhile, Merlyn Casanova, executive director of Anecacao , indicated that shipments of cocoa paste correspond to 7% of the total cocoa and semi-finished products that Ecuador exports.

Last year Ecuador exported $ 935 million of cocoa and semi-finished products, 22% more than in 2019.

“Our main pasta buyer is the United States with more than 13,000 tons last year, followed by Japan, Chile, Argentina and Peru, all of them with an average annual purchases of cocoa paste of 2,000 tons each,” said Casanova, who explained that this product is the result of hulling, roasting and grinding cocoa beans and can be exported as blocks or in kiblets.

Meanwhile, the export expectations for cocoa paste for this year and the next will depend a lot on international production costs, according to Miranda, who pointed out that the common market for paste is very competitive and with very small margins.

“With an increase in added value, Ecuador gains this value, it is necessary to export and explore new markets in order to possess the product,” said the leader.

For Felipe Ribadeneira, president of Fedexpor, the performance of these non-traditional products is due in part to the fact that due to the pandemic, consumers in large consumption centers prioritized their spending on products with high nutritional content, as well as high standards of quality and biosecurity that precisely distinguish the exportable basket of Ecuador.

“These characteristics together with the quality of the product and the continuous optimization of the production process have allowed these products to be positioned on the hangers of the most demanding international markets, where their value is higher when these standards are met,” said Ribadeneira.

However, he pointed out that it is necessary to articulate efforts so that, under a joint public-private effort, tools can be generated to diversify markets in this type of products with high expansion potential and, at the same time, generate conditions for new sectors and Non-traditional supply actors join this export dynamic.

Another non-traditional product that performed exceptionally in 2020 was ginger. According to figures from the Central Bank of Ecuador (BCE), that year $ 3.8 million were exported , a growth of 2,102% , compared to 2019, even adding four new destination markets to the four that already existed.

The main destinations for Ecuadorian ginger are the United States, Colombia and the Netherlands, where 37 exporters (29 of them joined in 2020) export their products.