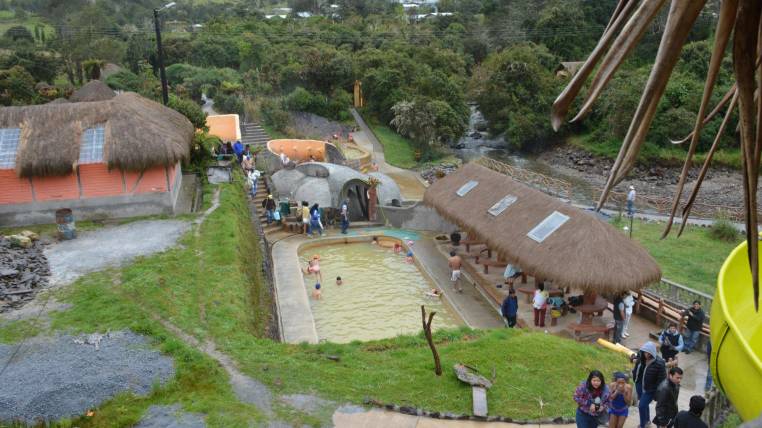 Oyacachi is in the middle of the mountain, within the Cayambe-Coca Ecological Reserve and is a parish whose inhabitants maintain their traditional and ancestral style of life. They are descendants of the Cosanga culture and speak the Kichwa. According to the story, they populated the sector 500 years ago. Here its 160 families are engaged in agriculture, crafts and also tourism.

Twenty years ago, the promotion of tourism began with the construction of thermal water pools. They took advantage of the benefits of the Cayambe volcano and from its bowels they are supplied with thermal water.

The parish belongs to the canton El Chaco, province of Napo. Gerardo Parión, inhabitant of Oyacachi, explained that the spa was opened in 1998 and that it is one of the few that are located in the Andean peaks of South America.

To get to the pools of Oyacachi it is advisable to go by private vehicle or if you use public transport you must be willing to stay in the cabins that also exist in the community.

Oyacachi is the only cold zone in the Amazon, at 3,200 meters above sea level; there are routes from Cayambe until the sector, but at certain times and from the parish they leave only at 04:00, and an additional bus on Sundays at 2:00 p.m. The water pools are inside a recreational complex that is kind to the green nature that surrounds it.

Mauricio Parión, leader of the community, said that inside the complex tourists can taste typical food such as trout, as they have breeding sites. In addition there is a meeting room that is rented for social events.

Parión reported that the complex is quite visited because the waters are medicinal. They extract it below the earth of the Cayambe and the Antisana volcano and the temperature is between 38 to 42 degrees Celsius. The yellowish color is because it contains iron, sulfur, calcium and magnesium.

In Oyacachi we still work in community. What is generated from the sale of handicrafts and income that tourists leave the complex, then distributed to the nearly 600 inhabitants, said Mauricio Parion. When it comes to handicrafts, men and women work in their homes and when they have finished their jobs, they deliver them to the community store where they sell them and then hand over their earnings.

The parish is inhabited by natives and hence its derivation from the name of the community that in Kichwa means ‘Cara de Sal’, from the words ‘Oya’, which is ‘expensive’, and cachi which means salt.

The historian Jorge Ortiz Pineda said that the Cosanga-Panzaleo culture inhabited an intermediate point in the Sierra and the Amazon. In the provinces of Pichincha, Cotopaxi, Tungurahua and Napo, vestiges of their existence have been found. He added that they were working communities that cultivated the land and that inherited their descendants.

The parish, because it is located in a reserved area, is rich in biodiversity. In this place are animals that are in danger of extinction, such as the spectacled bear, condor, puma and tapir, which lives in nearby forests, said Mauricio Parión, community leader. These animals have become the symbol of the parish and they venerate them by carving their figures in wood. There are archaeological and historical sites that tell the story of the population that belongs to the Amazon, but lives in the mountains. (I)

Paco Velasco accused of being the nexus between the FARC and Correa; he denies it