Pancho Segura has a place in eternity 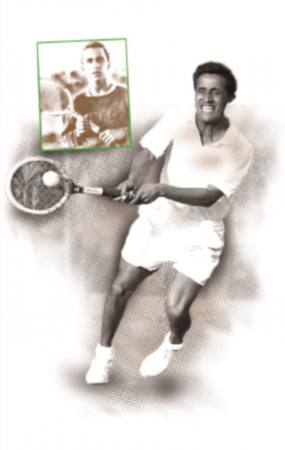 It is for the Ecuadorian sports the saddest news of 2017 that is over: yesterday died in California the national sports hero Francisco Segura Cano. The information has given details of all the newspapers and radio and television spaces around the world, because Segura reached universal dimensions for his tennis career, so original in its beginnings and full of triumphs that made him a legend.

In his childhood nobody thought that small, skinny, crooked legs, of family of limited economic resources boy would get to be one of the most admired tennis players of the history in an expensive sport and of aristocratic privileges. His father, Domingo Segura, was hired as the guardian of the Guayaquil Tenis Club when this entity had as its headquarters a sugarcane house and a few cement fields on street 5 de Junio, near the Guayas River.

Watching the members of the club play, his sporting passion was born and he started his practice with a racket abandoned for old and useless. Pancho composed it and co-ordinated it asking to be given the ropes that no longer served. He also started his first job as well: stringer

He learned without masters the movements of the game. Later they used his as a gateway and later as a sparring partner. He found it one afternoon in 1935, when Pancho was 16 years old, the famous journalist Francisco Rodríguez Garzón, who published a report in the magazine Semana Gráfica that we had to discover 30 years later. There appeared Segura in a photo, with a racket in his hand and some very large shoes that he had borrowed. Years later, the media of all the continents would dedicate long chronicles.

In 1936 passed through our city J. G. Bloum, champion of the Canal Zone, and asked his friends for facilities to train. They took him to the Tennis Club and arranged for Segura to help him. In front of a giant, the emaciated apprentice was a waterspout and won in two sets. Bloum showed his astonishment not only for the quality of the boy, but also for his original two-handed drive.

In 1938 he was going to make a selective for the I Bolivarian Games. Segura could not represent the Tennis Club because he was not – and could not be – a member and it was necessary that the members were affiliated with a provincial federation. Segura chose “Liga Deportiva Estudiantil”, which was his first club. In the tournament held in Quito he destroyed his rivals and in the Bolivarianos of Bogotá he won the gold medal, beating the Colombian Jorge Combariza.

A year later he went to the South American of Montevideo, where he provoked again astonishment to the point of being called the Implacable Reaper, for his two-handed blow. He reached the final to defeat the best tennis player in this part of the continent: the Argentine Lucilo del Castillo. He invited him to Buenos Aires, where Segura won all his matches, and then followed Chile, where he returned unbeaten from his tour.

In Montevideo he was seen playing by the journalist Manuel Laverde, of the newspaper La Prensa in New York, who published several articles highlighting the class of our tennis player. Laverde talked about him with Elwood Cooke, a brilliant millionaire tennis player who came to Guayaquil in 1940 and verified the truth of what the journalist was saying. With the help of several partners, Segura traveled to the United States, where, shortly after arriving, he managed to be among the best.

Iit is impossible to detail all the triumphs of Segura, but we cannot omit his step to professionalism in 1948 joining the troop that commanded Jack Kramer (Segura has “the best blow in the history of tennis”, he said). In that year and the next he was world champion in doubles with Kramer, and in 1954 and 1958, in a partnership with Pancho González. In 1950 he won his first world title in singles at Forest Hill by beating Frank Kovacs, after eliminating Jack Kramer and Willy van Horn. In the Skating Club, Cleveland, nobody believed what he saw: Segura won 8-6 in the third set. In the room, Kovacs cramped and Segura asked to let him rest. The game resumed, but Kovacs fell again. They took him to the dressing room and from there the judge, Ned Brown, returned to announce the retirement of the Californian and to proclaim Segura the professional world champion.

This newspaper said: “Francisco Segura, the great tennis player of Ecuador, yesterday achieved his definitive consecration by winning the US professional championship, which is equivalent to the world championship. Segura, 28, beat Frank Kovacs after a tight match 6-4, 1-6, 8-6, 4-4. The Ecuadorian reached its apogee by keeping Kovacs on the defensive with his powerful blows with both hands. His professional achievement was rewarded with $ 1,500. ”

In 1951 his victim in the finals was Pancho González, one of the giants of tennis. Perhaps his biggest victory was that of 1957 when Pancho was 36 years old, ten more than Gonzalez, and the Australian tennis players Lew Hoad and Ken Rosewall had arrived with professional forecasts for the circuit. Nobody could win against our compatriot, crowned without losing a set.

When Pancho Segura officially retired, at age 47, he became coach of the Beverly Hills Tennis Club, where he formed a star like Jimmy Connors and was the favorite instructor of movie stars such as Ava Gardner,Charlton Heston, Burt Reynolds, Dean Martin, William Holden, Lauren Bacall, Barbara Streisand, to name a few.

In 1984 he was elevated to the World Tennis Hall of Fame, an honor never achieved by any tricolor athlete and a passport to immortality. A message from the Professional Tennis Association said on that occasion: “His skill, spirit and enthusiasm helped professional tennis to survive its darkest days. As a tennis player there are few that equal him. As a player he is a virtuoso. As a man he is the friend of all who love this game. ”

May Pancho Segura rest in peace, glory and pride of all Ecuadorianity.

“In my generation, anyone who was involved in tennis would say: There goes Pancho Segura! Does not generate but the greatest respect for his attitude towards tennis, his skills as a coach and, in general, everything he represents … I do not think anyone knew more about the game” said Jimmy Connors, Ex tennis player.