Paraguay, Brazil and Argentina suffer the ravages of floods 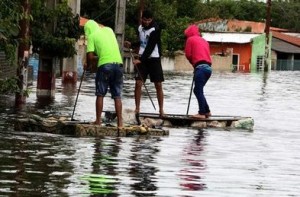 At least 300,000 Paraguayans, 50 thousand Brazilians and Argentines over 12 thousand have been evacuated due to heavy rains, overflowing rivers and flooding that have affected these countries in recent weeks.

Floods have become frequent news for Latin America in recent weeks. In Paraguay, at least 300,000 people have been evacuated; 50 thousand Brazilians and Argentines over 12 thousand pass through the same situation.

In Asuncion (capital of Paraguay), the most affected city and declared this Monday in disaster situation, the Paraguay river rose five inches in the port until the 7.1 meters.

Although not the highest recorded level, the current flooding is the worst in its history by the number of evacuees, 75,800 so far, according to figures from the municipality.

The comptroller would not audit the public sector, according a constitutional amendment