Partial veto to the Land Law 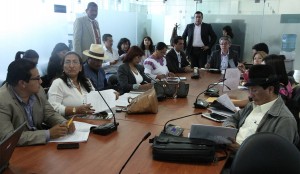 President Rafael Correa submitted yesterday to the Assembly 18 objections to the draft Law on Rural Land and Ancestral Territories related to the purchase of land by foreign public companies, grounds for expropriation and affectation, among other issues.

Correa proposed that foreign public companies can purchase, rent or usufruct rural lands in the country for agricultural production projects, prior authorization of the National Agricultural Authority.