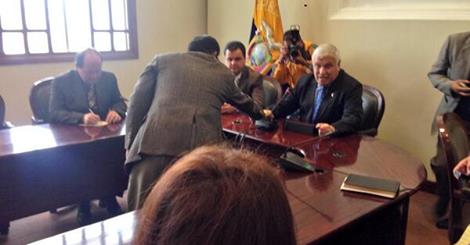 Militants of the `Participa´ political Movement of the Prefect of Azuay, Paúl Carrasco, were upset with the delivery of the manifest to President Rafael Correa by the Mayor of Cuenca, Marcelo Cabrera, who belongs to `Igualdad´poilitical Movement.

According to the Director of `Participa´Geovanny Palacios, they are not in accordance with the contents of the document delivered by Cabrera and they announced it last Monday night when they met. But they gave him the freedom to submit it if deemed necessary.

Palacios said that this does not mean that the alliance is broken and they will keep it by obligation with the electorate, because they submitted joint work plans … and “because we process in different ways these discrepancies … we do not expel …”.

The Leader of the `Igualdad´ Movement, Cristian Zamora, confirmed that the alliance is maintained. According to him, what Mayor Cabrera did wasopening up a space with the Government to seek support for macro projects of the city, without specifying which.

Resolution that will regulate the charge of 0.5% tax to credit becomes effective