Parties ‘unite’ to demand the resignation of Rafael Correa 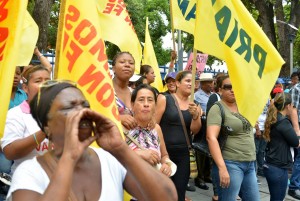 Yesterday on the outside of the Guayas governor´s office, a group of protesters called for the resignation of president Rafael Correa, others the legalization of their lands and a third group asked for silence.

Leaders of the extincts, SP, CFP and FE held a protest to demand the resignation of the head of state. They clarified that an alliance among them does not exist and announced further actions.

One of the first to arrive in the scene was Wilson Sanchez, co-founder of the Institutional Renewal Party of National Action (Prian), currently eliminated from the electoral register.

Minutes after the protest began, security increased outside the building. Security fences were placed at the entrance, while motorcycle cops and others came with shields and helmets arrived. The police barrier preceded a group of supporters of the PAIS movement, with shirts and green flags, who chanted in favor of the government at the foot of the public institution.