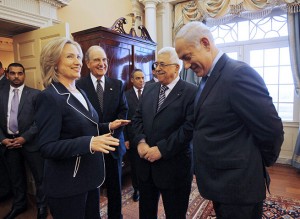 The conclusion after a morning full of meetings is that the talks go on. George Mitchell, American peace representative, informed to the media at Sharm el-Sheikhon Tuesday. He said in Jerusalem that there will be more talks among Binyamin Netanyahu (Israel) and Mahmoud Abbas (Palestina) with the attendance of Hillary Clinton, Secretary of State. In coming days, there will be further unplanned talks between lower officials and yet another round between leaders.

The process of negotiation is still weak but due to the gathering at the Egyptian resort in the red sea Sharm, it has been empowered.

The American envoys hope for a wider agreement.

In the late days of his presidential period, Bill Clinton recommended Israel to take possession of the “settlement blocks” that it built near the pre-1967 border with the West Bank. It would recompense with unsettled land the new state of Palestine. Clinton made the same offer to Jerusalem: the post-1967 Israeli-built suburbs would be annexed to West Jerusalem, Israel’s capital; the Arab districts would become a part of the capital of Palestine with the holy sites places under a special international regime. Ehud Barak, Israeli leader at the time, accepted but the Palestinian leader (Yasser Arafat) couldn’t bring himself to do so.

Clinton Parameters are to serve as a solution to the talks threaten: The fact that Netanyahu’s suspension on settlement building expires before the month ends. The Israeli leader would limit further building to the “blocks”, and the Palestinian leader would say nothing, anticipating an eventual peace treat that would leave the blocks under Israel; the size of the blocks would emerge as next trouble.

If Obama is reusing Clinton parameters, it would be wise, Israel would welcome the correction of his administration’s original position: ordering a settlements freeze from Israel, including the blocks and the East Jerusalem Jewish suburbs.  The demand was accepted without hesitation by Palestinian authorities, it united the broad mainstream of Israeli opinion behind Netanyahu and his rightist-religious government.

Sceptics think talks are destined to fail because America hasn’t come up with any new ideas.