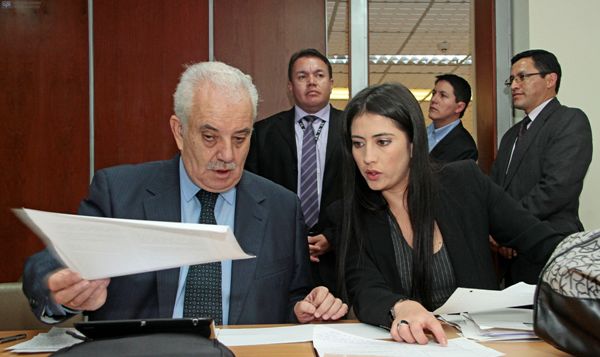 Judge Luis Enriquez, of the Criminal Division of the National Court, yesterday issued the decision in the granting of a credit to Argentine businessman Gaston Duzac. Eight people were convicted of bank embezzlement, six of them as authors and two as accomplices.

The Court, composed by judges Luis Enriquez, Miguel Jurado and Richard Villagomez, ratified the innocence of Zoila M, while declared guilty as perpetrators of bank embezzlement in the Cofiec case, Pedro Delgado, former President of the board of the Central Bank of  Ecuador  and former representative of Ugedep, his brother-in-law Francisco Endara, former secretary of the AGD Trust, and Gaston Duzac. Furthermore, Antonio Buñay, former President of the Cofiec bank; Marcelo Ordóñez, former Finance Manager of Cofiec; and Pedro Zapac, President of Seguros Rocafuerte.

The judge convicted Patricia S. and Jacqueline J. A  of concealing, whom by principle of lenity will not be applied penalty, the prosecution said on its Twitter account.

Attorney General Galo Chiriboga said he will not appeal the judgment and the extraditions of Delgado and Duzac have already been requested.