Peninsula Drug Lab Seized Near a Military Base 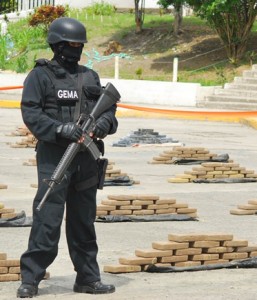 The military base San Antonio in Playas was near a hidden drug laboratory that was discovered by the Narcotics Police during an operative called “White Desert.” The secret lab was found on kilometer 4,4 in the location El Morro, Guayas province.

The officers arrived to the facility thanks to anonymous calls made to the emergency number 1-800 drugs. Policemen arrived Tuesday morning along with the Servicio de Inteligencia Antinarcóticos (SIAN), Grupo Especial Móvil Antinarcóticos (GEMA), and Grupo de Intervención y Rescate (GIR). Meanwhile the criminals that manufactured the narcotic discovered the officers and opened fire, at the same time they burned the evidence. Over 20 suspects ran towards the property, only four Colombians decided to make their escape on a truck that was abandoned on the nearest gas station. During the crossfire the criminals were detained and afterwards identified as Hermes Muñoz Hoyos, Bladimir Gallardo Silva, Jose Noraldo Cabrera Cabrera, and Segundo Gerardo Ruiz Ñañez. The Ecuadorian driver Byron Reyes Borbor was also arrested, however the judge did not ruled any charges and Reyes was freed.

Coronel Edmundo Mera, national director of Narcotics revealed that after the operative they discovered 315 tuna cans that contained 295 kilos of basic cocaine. Mera added that the lab had a production capacity of $5 million, and the authorities have not discovered the identity of the owner or the precedence of the merchandise. The drug was destined to European underground markets.