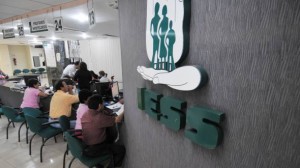 The Board of the Ecuadorian Institute of Social Security (IESS) passed a resolution to change the contribution made by members and employers, said yesterday the head of the body, Richard Espinosa. He explained that the decision adopted last Friday will not involve an increase in the contribution but an internal redistribution of funds.

The measure essentially consists in reducing the resources received by the pensions insurance to solve the serious financial situation experienced by the Health Fund, which covers medical care of members and retirees.

The measure will last five years and is progressive: the first year, pensions will have a sharp drop of 9.74 to 6.06% of the contribution and will then recover until 2021 when the rate increases at 10.66%. The opposite will happen with Health.

The measure applies from this month and will means a loss of $ 232 million this year. In 2016, the year of greater reduction, the downturn will be of about USD 1 000 million.
Source: http://www.elcomercio.com/actualidad/iess-fondodepensiones-ingresos-afiliados-salud.html

Pablo Arosemena: “The only doorbell we need is the one that opens the door to more freedoms”