People Died During the Clashes in Southern Syria 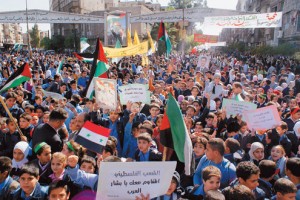 Syrian police launched a brutal assault Wednesday on a neighborhood that supported anti-government protesters. Officers shot down 15 civilians in an operation of 24 hours. Six demonstrators perished in the morning, during an attack on the al-Omari mosque in the southern agricultural city of Daraa. The activists informed that the police shot another three people in the center of Daraa after dusk, and six more bodies were discovered later in the day.

Four villages near Daraa have become the biggest domestic challenge to the Syrian government. Security forces responded with water cannons, tear gas, rubber bullets and live ammunition. The total death toll has risen to 22. The democratic activists in Damascus contacted the people of Daraa and informed them that six people were killed in a raid on the mosque. Meanwhile civil unrest is being reported, as an armed gang attacked and ambulance in Daraa, the security forces killed at least four gang bangers.

Witnesses of the assaults informed that the security forces were geared up with AK47s assault rifles and hand grenades. Several anti-terrorism police surrounded the al-Omari mosque. Four bodies were lying near a security agency and nobody dared to pick them up due to the fear of going outside. The civil unrest started with the arrest of a group of students that painted an anti-government graffiti on walls in the main city of Daraa. The incident grew when the Syrian government fired the governor of the southern province of Daraa. Afterwards hundreds of people marched demanding reforms. On Wednesday, Abdul-Karim al-Rihawi, head of the Arab League for Human Rights, informed that several prominent activists have been arrested in the past two days.

Guayas Will Turn off Their Lights for the World