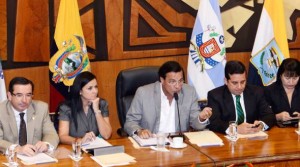 At a meeting on August 25, the President of the National Electoral Council (CNE for its Spanish acronym), Domingo Paredes, and the Prefect of Guayas, Jimmy Jairala, met in Guayaquil and analyzed the possibility of performing a popular consultation as a mechanism to resolve the bordering problems between Guayas and its neighboring provinces.

Jairala asured that the Prefecture will officially rise to the President of the CNE “a consultation” to know how the institution should act in the 14 border disputes with other provinces.

The Law for the Territorial Limits Fixation contemplates the query, but also friendly procedures.

“I’m sure that, of the 14 points of controversy in Guayas, there are at least three or four where we can finally reach agreements without the need to resort to a referendum ” reiterated the Prefect.