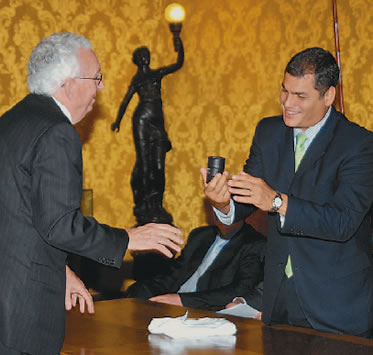 The contract of Specific Services of the Canadian oil company Ivanhoe for exploration and exploitation of Pungarayacu field will be terminated in Ecuador after more than five years of work in block 20. The announcement was made by Petroamazonas Manager, Oswaldo Madrid, in an interview with daily El Comercio.

“We’re doing the procedures of termination of contract with Ivanhoe (…). The Ivanhoe work done during this time is important and will be the basis for the development of the field. (…) We are thinking how to redefine the exploitation and find more investors”, said Madrid, without giving a date by which the process will be implemented.

In October 2008, Ivanhoe and Petroecuador signed a Specific Services contract, where the company has committed to remove the crude of Pungarayacu in exchange for a fee of $ 37 per barrel. This contract had three execution phases: assessment, pilot phase and exploitation.

However, after the of completion the assessment phase, in December 2013, the company determined that the oil of the field had not the originally planned quality. According to Madrid, the oil company found a heavy crude, between 8 and 9 degrees, when they expected to find a 12 degree API oil.