Petrochina has to allocate, directly and without intermediaries, 30% of Petroecuador’s oil volume to refineries in Asia. 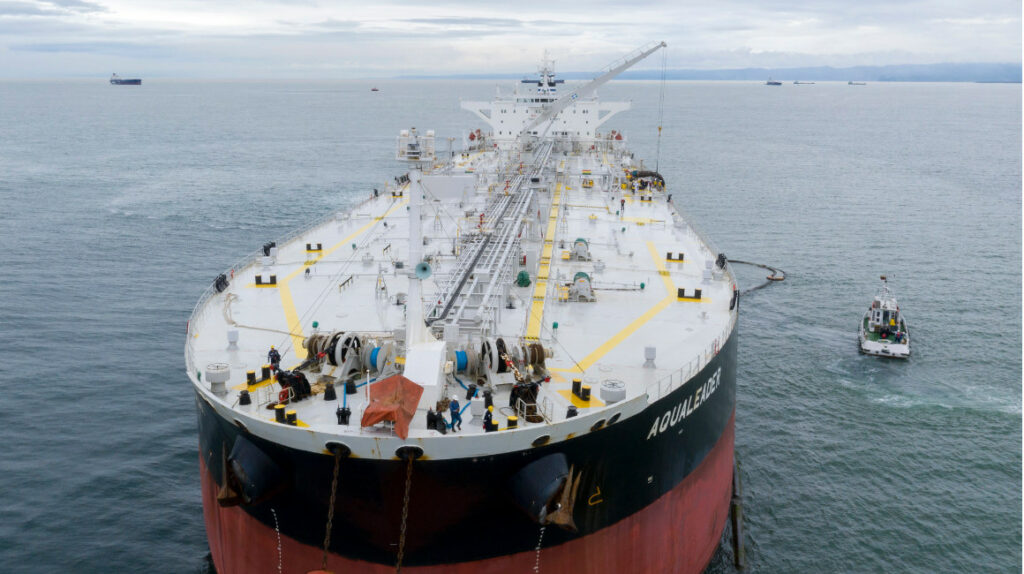 Ecuadorian oil transport ship at the Balao Maritime Terminal on the Pacific Ocean coast. Petroecuador archive of May 2020.

After the renegotiation with China, the state company Petroecuador considerably expanded the volume of oil available for sale through open tender in 2023.

Before the renegotiation, Petroecuador expected to place around 25 million oil per year through an open tender.

By 2023, that volume will rise to 44 million barrels of oil, with which Ecuador hopes to improve the sale price of its crude.

This is equivalent to 40% of Petroecuador’s available oil supply for export, which is 111 million barrels of oil.

Another 52.9 million barrels will be delivered to comply with the four current oil pre-sales with three Asian companies. That is, two with Petrochina, one with Unipec and one with Petrothailand.

And the remaining 14 million barrels will be to comply with medium-term oil sales contracts. Those are: one with the American Marathon, one with the state-owned Petroperú and one with the British Shell.

The renegotiation with Petrochina, a subsidiary of the Chinese state giant CNPC, allowed Petroecuador to extend the term of the two oil pre-sales that were in force.

Both contracts committed Ecuador to deliver 192 cargoes of oil or 69.1 million barrels to Petrochina through 2024 . With the renegotiation, that term was extended to 2027, which allowed oil to be released.

These oil pre-sales contemplated a price formula, agreed in 2014 in the government of Rafael Correa, which ensured prices below the market in favor of Asian companies.

The fate of oil

Before the renegotiation, the destination of Ecuadorian oil sold to China was free, which opened the door for intermediaries to resell it to the detriment of Ecuador.

In July 2022, for example, intermediation reduced the price of Ecuadorian Oriente oil by USD 13.88 and that of Napo-type crude oil by USD 18.93.

After the renegotiation, Petrochina has to allocate, directly and without intermediaries, 30% of the volume of Ecuadorian oil to refineries in Asia.

If it does not comply with that clause, Petrochina would have to pay Ecuador a premium (or penalty) of USD 0.38 per barrel on the totality of all deliveries foreseen in the contracts with Petrochina.

After the renegotiation, Petroecuador will also obtain better prices for the sale of the 52.9 million barrels of oil that it must deliver to Petrochina as part of the current pre-sales.

The improvement of the formula to calculate the price of a barrel of oil for these contracts will mean a benefit of USD 28 million in favor of Ecuador between 2022 and 2027, according to Petroecuador calculations.

This is equivalent to an improvement of USD 0.40 in the price per barrel on average just by adjusting the formula.