Pistorius, sentenced to five years in prison for killing his girlfriend 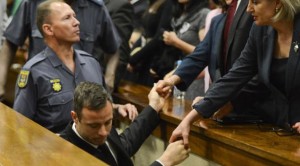 The South African athlete Oscar Pistorius was sentenced today to five years in prison for killing his girlfriend, model Reeva Steenkamp in February 2013.

The defendant “is liable to a maximum penalty of five years in prison,” the judge Thokozile Masipa ruled, who in September declared the athlete guilty of manslaughter.

The athlete was also punished to three years of suspended imprisonment for two incidents preceding the death of Reeva, in which he used a firearm in public.

Pistorius was convicted of killing Reeva in his home in Pretoria, by firing four shots through the door of the bathroom, where she was locked.

The defense argued throughout the process, that the athlete thought the one in the bathroom was a thief. The judge noted that a sentence of community work, as requested by the defense “would not be appropriate”.

“A non prison sentence would send the wrong message to society, but on the other hand, a long-term sentence would not be appropriate,” the judge argued.