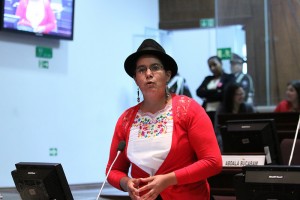 The assembly majority of the ruling party Alianza PAIS (AP) yesterday gave no way to the change of the agenda to discuss a draft resolution on rejection of violence against opposition Assemblywoman Lourdes Tiban (Pachakutik).

The proponent of the resolution, Magali Orellana, also of PK, said it was regrettable and they reject the violence committed against Tiban, who reported that he was intercepted on Wednesday half a block from her office in the Assembly, dragged by the hair, beaten in the head, insulted and threatened with death.

On the subject, the president in charge, Rosana Alvarado (AP), said that time ago the plenary ruled against all forms of violence, and it is an obligation to reject, wherever they come from, slander and also in other occasions legislators Betty Carrillo, Maria Augusta Calle and Rosa Muñoz have been assaulted, “but they do not have headlines in the newspapers.”