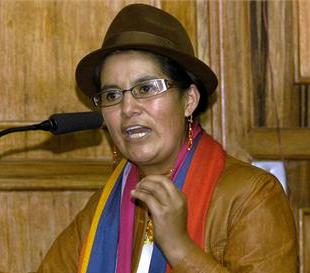 Relatives of the officers involved in the September 30 (30-S) riots gathered today at Pachakutik’s headquarters to formalize the demands that they are going to present to the Inter-American Court of Human Rights in Costa Rica against the Ecuadorian State.

The reason of this meeting is to designate a responsible commission to travel to Costa Rica to present the causes.

Assembly Lourdes Tibán says that currently there are 10 cases that could reach the organization. She also said that there are around300 policemen that are being investigated but most of them choose not to present their cases because they fears reprisals.

According to Tibán, this is not a legal process but rather a political one and said that while some officers are still in liberty, they will be judge and sentenced at the end.

Several relatives of those affected maintain hope that their relatives may be acquitted. In other cases, where they have been released by replacement of precautionary measures, prefer to stay out of the initiative of Assembly Tibán. There are about 38 officers investigated by the Prosecutor Jorge Cano for alleged rebellion in the instruction, but not all of them have joined the initiative.

Alvaro Noboa: “I am neither legal agent nor director of Bananera”