Police officers will be discharged 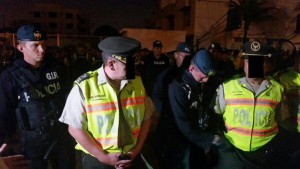 Among the twelve arrested on charges of smuggling and illicit association there are nine policemen, the Interior Minister Jose Serrano, lamented this fact.

“We have said that if we want our democracy to be properly consolidated and strengthened, the National Police is the one that should be the in the first place of that strengthening and that institutionalization. Members who have been arrested for the crime of smuggling will be dissociated immediately from the institution,” Serrano said.

He added that besides the lieutenant colonel, sergeants and corporals would be involved with a gang engaged in smuggling on the border with Peru, on the side of El Oro province.

The operation was called Link 78. Interior Ministry figures show that 35 police officers have been arrested in this kind of police actions, carried out since 2014 nationwide.

Shrimp farmers will have insurance, according to the MAGAP